Use ROS2, an ESP32, and the web browser to control a motor driver 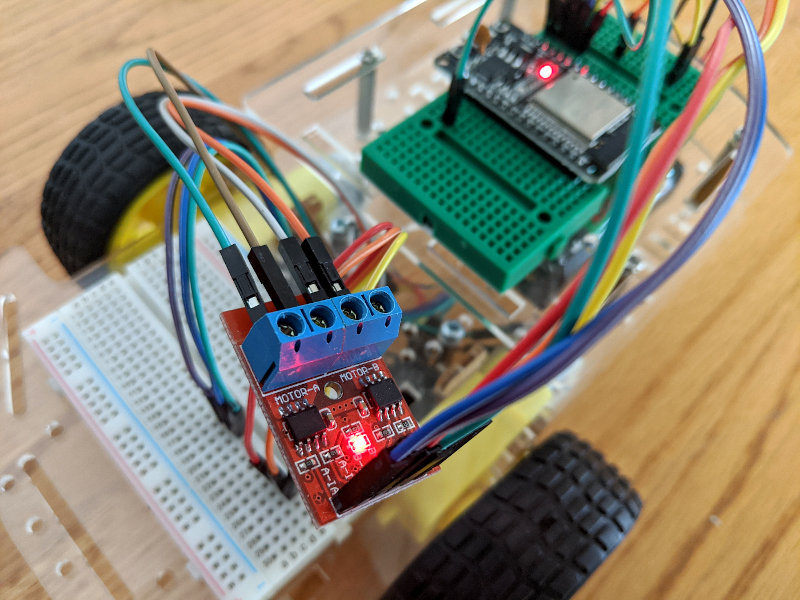 Hadabot is a robot kit for those looking to actively learn ROS2 and robotics while building a robot.

A new Hadabot kit is currently in development. It will feature ROS2 support and emphasize a web browser-based user experience. Our goal is to create an economical kit that is easy to build and set up, allowing you to learn and hack ROS2 robotics with minimal frustration.

I've been posting the progress regularly. The main software stack uses Docker containers running locally on your host development system to ensure privacy and security. On your local system, you can launch a bash terminal in your web browser to interface with ROS2 (ie web-bash). We will also publish browser based GUI tools to interface with ROS2 and the Hadabot as well.

On the robot platform, we have an ESP32 microcontroller that communicates with ROS2 and the main software stack on your local host system.

For this post, we'll set up and run an example to show how we can use ROS2 to control a motor driver connected to the Hadabot's ESP32 microcontroller. Specifically, I'll:

Reading this post and running the example should take you 15-20 minutes.

The Hadabot uses an ESP32 microcontroller wired up to a L9110 2-channel motor driver to control the 2 motorized wheels. The L9110 motor driver uses 2 control pins per wheel or channel. One pin controls the direction of the spin. The 2nd pin is driven with pulse width modulation (PWM) to control the speed at which the motor spins. As a 2-channel driver, the L9110 has 4 control pins total.

Regardless if you are new to Hadabot or a returning hacker, follow step 2a to update your Hadabot Git repository, re-start the Hadabot Docker stack, and launch a web-bash terminal.

At the end of step 2a, you should have a web-bash terminal up like you see below. We'll be using the web-bash later.

3. Update the Hadabot's ESP32 with the latest firmware

The Hadabot's ESP32 microcontroller is flashed with MicroPython allowing us to write firmware functionality in Python.

If you are new to Hadabot, you will need to follow step 2a thru 2d to install a couple of tools needed to flash your ESP32 board, download, update the firmware, reset the ESP32.

-- If you are a returning Hadabot hacker --

... to confirm the various settings.

Next, plug in your ESP32 to your computer.

While still in hadabot_main/firmware, run the clean_firmware.py script on your ESP32 using ampy.

... then follow the instructions to (1) copy the (updated) Hadabot MicroPython firmware files over to the ESP32, (2) reset the ESP32.

Once the ESP32 resets, the ESP32's blue on-board LED (aka "on-board LED" for the future of this post) should blink a couple of times as it connects to your network and then stay lit once it connects.

You are now free to disconnect the ESP32 from your host machine and to an external power source if you like.

4. Example to spin the ESP32 wheels

5. How we use ROS2 to spin the motors

The Float32 messages have values between 1.0 to -1.0, representing full power forward to full power backward. Depending on which value is received, the ESP32 turns the respective wheel with the desired intensity as a Pulse Width signal to the motor driver.

The firmware is written in Python3 and runs on the ESP32's MicroPython interpreter. I won't describe the actual firmware code that drives the pins, which lives in the uhadabot folder, since the code has more to do with microcontroller programming than ROS2 or robotics. 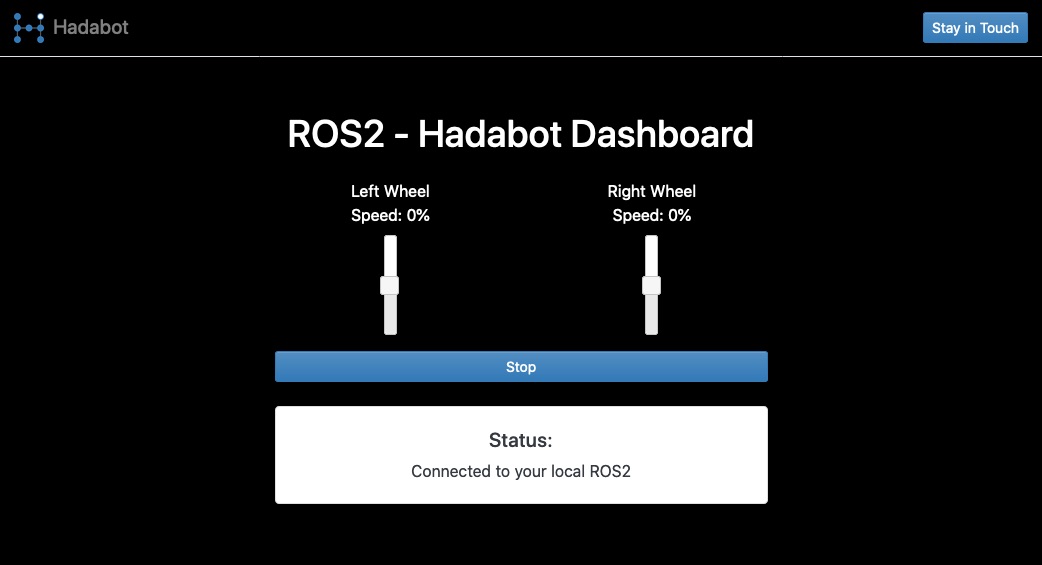 In the first method, you used our Hadabot browser based GUI. As you manipulated the slider bar, a Float32 value between 1.0 and -1.0 is published over ROS2 depending on the position of the slider. The "STOP" button publishes a 0.0 on both topics stopping both wheels.

6. Our Hadabot can turn its wheels - now what?

At the lowest level (ie at the ESP32 microcontroller level), we need a way to specify the power to each motor on the Hadabot. But at a high level, it is awkward to drive a differential robot (or any wheeled vehicle) by explicitly setting a left and right wheel power level. Intuitively, we want to command the robot to go forward, backward, turn left or right - like what we did with the teleop controller that publishes Twist ROS2 messages.

As the Hadabot platform matures, I'll introduce code to convert Twist messages into the individual Float32 wheel power messages for each wheel - a robotics discipline known as kinematics.

Additionally, the high-level Twist message commands should not be in units of "power levels". We want to specify velocity as some unit over time - ie meters per second and radians per second. By specifying velocity (instead of power level), we can track where the Hadabot goes as well as specify where it should go in the future and how - in robotics-speak this would be state, pose estimation, localization, and motion planning.

There are other developments that need to occur before either of the robotics concepts above are introduced. More reason to stay in touch!!

Congrats on completing another Hadabot example. If you followed along, you did the following:

I'll be posting updates 1 to 2 times a week. Keep updated on future Hadabot developments via the stay in touch button in the navbar above or footer below. Share Hadabot with other hackers and roboticists.